Dustin Washburn will be the new Offensive Coordinator for the Lake Belton Broncos.  Dustin has coached the last 11 years in college with his last stop being at the University of Mary Hardin Baylor.  He has been at UMHB for the last 2 years.  In 2018 their Offensive Line was an instrumental part in winning the Division III National Championship.  While at UMHB they had the #1 offense in the nation in scoring.  He also has had 2 offensive lineman selected as lineman of the year for the conference and  7 offensive lineman were selected to the All-Region team. 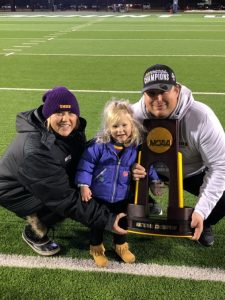 Before UMHB Dustin was the offensive line coach at Colorado School of Mines for four years.  While at Mines they were #1 in Total Offense and 3rd Down Efficiency in the nation.  He also had stops at Lincoln University in Jefferson, Missouri, Northeastern State Oklahoma and started his coaching career at Tarleton State University in Stephenville, Texas.  He is a graduate of Tarleton State University and has a Master’s in Education from Northeastern State.  He has also played professionally in the Arena Football Leagues. 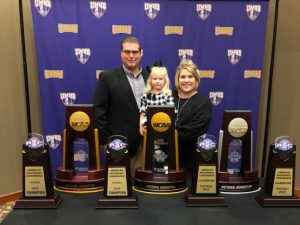 “On behalf of me and my wife Cassondra and my daughter Parker, we would like to thank Coach Cope and Coach Skidmore for this great opportunity. My goal as your Offensive Coordinator is to build a culture of winning based on the development of trust and commitment. As your Offensive Line coach I promise to bring amazing passion, energy and an complacent-less urgency to ensure the development of our players daily.”” It is an honor to be a part of the Lake Belton community, and I can’t wait to start laying the foundation of what can be a legacy of excellence.”

”To all of the Coaches at UMHB, thank you for being great friends and mentors. To Pete and Karen Fredenburg thank you for loving me and my family. Coach Fred you taught me to believe in the power of relationships. You believed in me and helped push me to be my best. I will forever be grateful for your mentor ship and your friendship. Cassondra, Parker and I will love you and Karen forever. “